Okay, non-believers please stop reading now ! You may not want to read this post as it contains images which some readers and small children may find disturbing -PLEASE CONTINUE WITH CAUTION ! Yep, that's right this post contains photographs of Scottish Crossbills (and some flash photography) ! "The horror, the horror" to quote Marlon Brando's Colonel Kurt.

These pics are from a relatively sucessful ringing session on Sunday with a couple of GRG colleagues - themselves both notable crossbill experts of some quite considerable repute (they may be reading !).

Seven birds caught in total which, to seasoned 'normal' ringers ( is there such a thing ? !), may not seem worthwhile but actually could not be further from the truth.

First bird caught, a cracking adult male with a honker of bill, almost putting it out of Scottish type range: 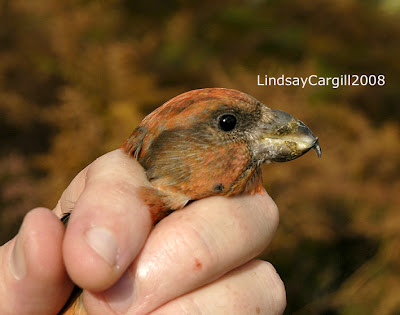 "Oooosha, look at the bill on that!"

As well as biometrics, speciation was also confirmed by it's call type, a classic Fc3 ( not shown as I know people have been pinching and using my sonograms - go get your own !).

Unusual bird of the day went to this female bird: 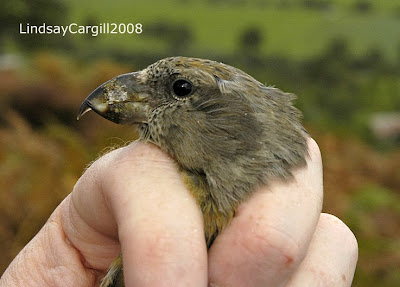 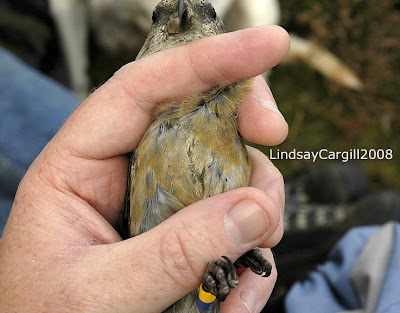 And a shot of the rump (normally green/bright green !): 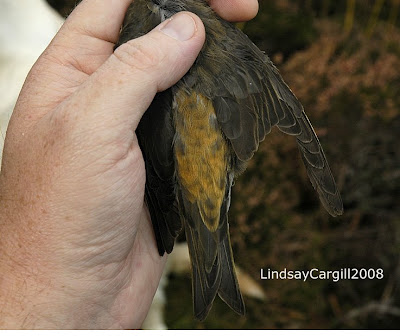 So, an orangey/bronze female type which was classified as female due to dark centres to crown feathers. A new one for me anyway, so glad I went. Nothing is straightforward as far as crossbills are concerned ! For me that is the part of their appeal. 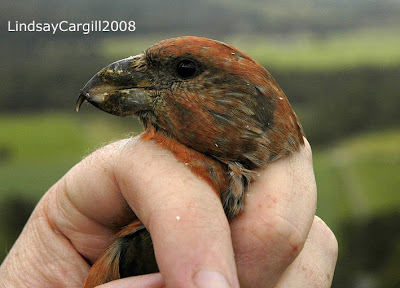 Note the pine resin on the mandibles of all the birds who are clearly still feeding on unopened scots pine cones.

All release calls were consistent with Scottish Crossbill (as were bios) though one female bird was mute ( which happens and is annoying). Had to use my ME67 and FR2LE partly due to portability and partly due to the fact my Pro6 handle has been back in Sweden since early August but this backup setup seems to work really well in this context, although some of the harmonics are fainter without the Telinga.

Hopefully many more successful sessions over the winter !

Where The Heck Ya Been ?

Okay, okay I AM feeling guilty that at least 6 people a day are visting this site only to think "that lazy crossbill loving tosser can't be doing much these days". Well that couldn't be further from the truth though I am back and will try to post some interesting stuff as it happens. Will also post some retrospective stuff especially from my summer holidays at Glen Affric which was fabby dabby - not only were the dragonflies in abundance but also had Parrot Crossbills in upper Glen Affric and Scottish at Coire Loch and at Corrimony. Loadsa Cresties as well - a bird that we really miss in Deeside.

In relation to a recent post on Bird Forum here is a nice pic from a hide session of a 2cy Scottish Crossbill on 13/07/08: 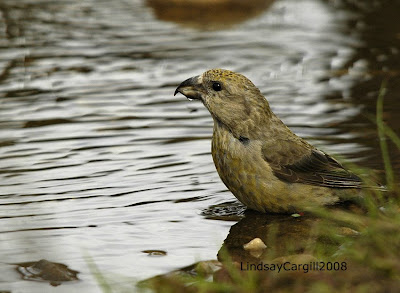 This individual was ringed as a pullus in the nest by a GRG colleague on 31/3/07 and he was pleased of the report that it was still alive over a year later. For those that are camera geeks I am afraid the equipment was modest: Nikon D70S, Tamron 200-500mm lens. It was shot on ISO400 as the light was pretty crap and it may have been raining a bit too. Was taken at around 9 feet distance from a Keatley Standard Dome Hide. These hides are fantastic and well worth the outlay. I also use the bag hide but it is harder to sit in for long periods and is more of an 'ad hoc' option in my opinion.

Now, me and my mate would know that this is a Scottish Crossbill, even without the ringing info (though we don't measure bios on pullus), but be honest what would you have it down as and why ? Now you can see why most of those photos on Birdguides and Surfbirds that are submitted as Scottish are actually Parrots !
Posted by Lindsay Cargill (aka Loxiafan) at 23:35 No comments: