It seems Bird Life International have taken it upon themeselves to de-classify Scottish Crossbill as a species.....and then all X-Files 'n' mysterious they have erased all trace of this unofficial press-release SEE HERE ! At a time when their partners the RSPB have just surveyed the species using a scientific rationale and whilst a new Red Crossbill 'species' has been proposed in USA, this seems a strange decision. Whilst I often hint at sceptisim, or at least an open mind, over the current classification of scotica, I nevertheless do believe that there is at least one crossbill 'species' or type endemic to Scotland. Boffins at BOU can decide on what constitutes speciation, but it seems in some quarters that if birdwatchers cannot see a difference through their Leica's then it cannot be a species. While I can sympathise with birders is this rationale sound ? What exactly made BirdLife International reach this decision ?

Those friendly neighbourhood BF's have started discussing Scotbill again HERE. I am kind of glad that I can't participate as it usually gets a bit silly. However, the comments in post #14 :

Not really wanting to single this guy out as he is only giving his opinion, this cannot be the case for the suggested indifference between crossbills, certainly morphologically. Birds selected for a particular conifer type would fluctuate (negatively) in numbers if that particular conifer type failed - this is one of the reasons crossbills migrate. By breeding with other types this would not necessarily ensure their, or in particular their offsprings survival - there is no advantage, quite the opposite possibly ! Even when several types of crossbills breed in the same area they breed with ones that look and sound the same. This is true even for Common Crossbill types. For example, a Parrot female will not mate with a Common male as the Common male will not be able to feed both himself, her on the nest and then chicks during a hard time of the year (Feb-April). Would it be advantageous to the Common male ? Well, if sucessfull presumably some of the offspring may have larger bills and be selected for a different niche, which would fit Jureks argument. My own thought is that he wants to be sucessful in passing on his genes to progeny who have a chance of survival. This would be with a mate of the same type and in an ecological niche that is optimal for that type ( eg. not a native Scots Pine forest in Feb-March). Thus, ecological niche specialisation plays a huge role in the assortative mating between Common and Parrot Crossbill - between Scottish and Parrot, well that could be diferent.

A Common Type 1A female I caught in June this year: 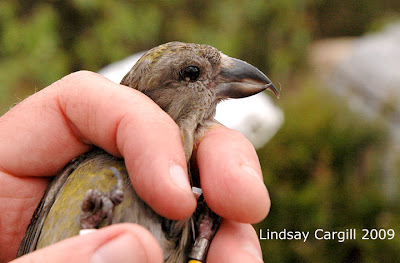 And a Parrot female I caught in August 09, notice the pronounced gonys (used for feeding) and the nictitating membrane on the eye: 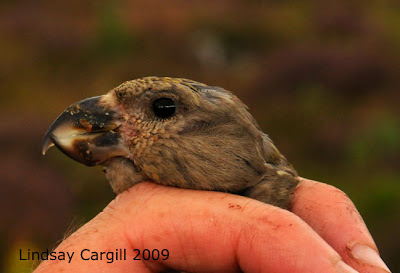 Still think they are the same species ? Surely not......

Scottish and Parrot Crossbill nest failure can be as high as 40-50% in some Springs. Genetics, in my opinion, is still an emerging science and more refined techniques may show genetic variation between the Loxia taxa. We will see. I guess the sceptics can cite Northern Bullfinch as a case against scotica's or possibly pytyops full status - it is bigger than the West European and UK races, but essentially, as far as I know, it still feeds and behaves as a Bullfinch ? It has a different call from those found in Scandanavia and Britain ( sound familiar ?!). Do these large Northern Bullfinches breed with the smaller forms ? Is there any genetic variation between these races ? For a thing to be half as big again there must surely be something in the genetic code ? Same with Parrot Crossbill in my opinion - it is much bigger than curvirostra. Northern races of birds do tend to be larger, but these are in Scotland. Just because we haven't found a genetic difference yet it doesn't mean it does not exist ( sounds like a IBWO believers mantra, oh no !).


My feeling is that each crossbill 'type' has a natural variation within its population as a whole and in adverse years certain individuals will be better adapted and will survive (in greater numbers)and others will die out. This can be seen on a local level - here in Scotland there was a sitka and larch failure last winter and Common Crossbills largely had to feed on Scots Pine. Only the fitest birds selected for that environment will have survived (or remained/bred) eg. birds with bills that could have coped with opening closed, hard Scots Pine cones. Subsequently, certain call types (and morph types) were not present in the region ! This would perhaps explain the variation in bill morphology of the various cryptic curvirostra types. As far as I know bill plasticity has not been fully explored so this is purely hypothetical on my part but it is something I hope to examine long term by studying a dormant population of large billed crossbills in Scotland as well as invading crossbills of the same call type over several influxes eg. many years. In years of good local larch and spruces one would expect a larger range of bill sizes amongst dormant crossbill populations, with smaller billed specimens sucessfully feeding on the non-native tree species. In years of non-native failures one would expect modal bill sizes to shift upwards.

When we classify Crossbills to species we tend to use measurements like bill, with mean bill depths often cited, but I think this is potentially misleading -Parrot Crossbill (as things stand) can have a bill depth anywhere from around 12.0 (!) through to 14.1mm and Common from around 9.0mm to 11.7 mm. Edelaar, van Eerde and Terpstra found for type A (Dutch) males that the mean bill depth was 10.62 mm with a range of 10.0 to 11.7mm. Again, this is a difference of 1.7mm, which is quite significant within a type (and which overlapped with the other type in the study).

I also think a bit more needs to be done on the inheritability of bill morphology in wild Crossbills. Studies in capativity show positive inheritability of bill size from parents, though personally what I felt that data showed was that a clutch of offspring averaged the midpoint of parents bill depths but exhibited quite a bit of variation matching that of the parent sample eg. range of bill depths for adult male scotica was 11.2-12.4mm, and for adult female 10.2 - 12.1mm. That is 1.9mm of variation for females, quite a bit of variation in crossbill terms.

However, in captivity they (adults and progeny) are not subjected to the pressures of a dynamic natural environment (where food suppy and type and temperature are not controlled), and afterall the catalyst of Darwinian evolution is natural variation within a population: without variation there can be no evolution. Such variation also promotes the survival of the 'species' by increasing it's adaptability to potentially adverse enivironmental conditions that may occur. Even assuming a high inheritability rate, if a particular population of crossbills ( type) has such a natural variation in bill structure (depth/shape), which they clearly do, and birds with similar bills mate with birds that have the same size of bills ( as they have been found to do) then this means that the progeny of the population as a whole will continue to have a range of bill sizes ( that they have inherited). But some will be better selected for particular environmental conditions than others will. Crossbills within that population are thus potentially selected for cones and seeds of various sizes - there will be an optimum, but there is an insurance policy that Nature has provided, one that is occasionally asked to 'pay out' when a cone crop fails. This might be the key with crossbills and why we all have nightmare identifying and classifying them.


This is one of the reasons I like studying crossbill calls, something which (unfairly) takes a fair bit of bashing as being 'pointless' it has to be said. Finches can learn calls from their parents and will also sychronize calls with a mate - the latter is something I have evidence of with Scottish Crossbill on two occasions. Mainly this is between a pair of the same call type or species ( as my examples were), but it has been noted in USA of birds of different types. But surely this makes crossbill taxonomy using calls even more vague: if the birds change calls, or birds of a specific type learn the call of a male in a mixed pair then how do we know who is who ? Well I don't think this is a reason to throw in the towel. It is a bit like being born in England but growing up from a young age in Scotland. You are English as a race but culturally there is a fair chance you will sound (and possibly behave) Scottish ! You may even attract a Scottish member of the opposite sex as a partner. To all intents and purposes you be will identified as Scottish by the Scottish population at large - you are effectively 'naturalised'. Biometrics do not have this 'cultural' focus but vocalisations do. In Crossbill terms, we may not really know what provenance a particular hybrid specimen is, but we at least know it thinks it is Scottish and will presumably act as expected ( if it can).

If hybridisation is a problem (and I am not sure it necessarily is) and is indeed the explanation for the genetic indifference, then surely it is as a result of specimens at either extreme of the bill depth ranges for a given type. Thus, a small billed Parrot may pair with a large billed Scottish Crossbill (at it's upper range) - they will 'look' the same (to each other and us !). They may even synchronize their calls as pairs often do. However, they will still have to contend with that harsh Scottish Spring which will select for the very fitest of individuals sucessfully breeding.........

Posted by Lindsay Cargill (aka Loxiafan) at 15:00 No comments: