Some of you may have gathered from my tweet that I was at Culbin Sands near Nairn a couple of Sundays ago. For those that don't know it Culbin is a massive Scots and Corsican Pine plantation on the sand dunes south of Nairn. It is home to Corsican Pines, Crested Tits, Scottish Crossbill and Southern Hawker (the target for the day). Below is just a brief summary of the day. 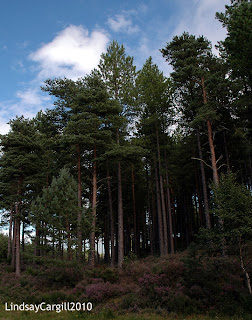 Spot The Corsican Pines ?
On arriving Common hawkers were patrolling the car park and there was an abundance of Scotch Argus butterflies which was a good start. All the way to the main Dragonfly pool Crested Tits were calling and we got great views - even one bathing at around 10 feet (though too shaded for a photo shot). I have heard recent reports of people missing Cresties at Culbin - my advice is to really familiarise yourself with the calls as you will hear birds long before you see them ( a bit like crossbills actually). With so many about you really would have to have been walking about blindfolded and ear plugs in not to have encountered them this day.


Arriving at the main pool Common Hawker males were patroling but within a minute or so a Southern Hawker male appeared followed by another and a dog fight ensued. S. Hawkers, very Common in England, are very scarce in Scotland and only seem to have a hold on this NE corner of Scotland - the area from Banff through to Beauly- and I understand that they are now dispersing South through the Great Glen and are at Fort William. Perhaps like other species of odonata they have been unintentionally ( or intentionally) introduced ? 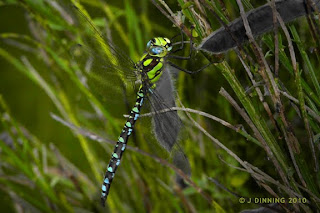 Male Southern Hawker
We found a cracking Southern Hawker exuvia about 3m out from the bank on a stem. I decided it was worth getting my feet wet so waded out to claim it. It turned out to be a perfect female SH exuvia. More Cresties were calling and moving around the dragonfly pool, but suddenly a Crossbill flew over and Remembird recorded this:

Pants Common Crossbill Sonagram
Now, to my ears this sounded almost cross between a Fc4 (glip) type call and a Fc1 (parakeet), but this is not clear on the sonagram, where the call looks more Fc1 ish. However, though it looks like a Fc1 "parakeet" type ( or 1B) it is possibly slightly too low in frequency for most Fc1 calls and is similar in frequency to Parrot ! To be honest it is like many of the vague calls I get sent by other people and in those cases I often shrug my shoulders, so I am going to practise what I preach with this call I made and call it as "can't be sure" ! What I will say is that aurally ( in the field) it was not Parrot ( which I have much experience) and it sounded 'clippy' so possibly a Fc1 afterall, but just a low pitched one. I think if it was a Fc4 the last ypward component would have shown up.
On the way back to the car, we came across the massive catepillar for a Goat Moth scrabling about on the path: 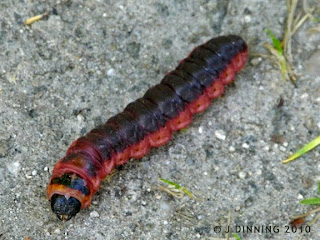 Goat Moth Catepillar.....Yummy !
Apparently these are quite unusal and scarce so a lucky find. The other Dragonfly pool had 4 Spot Chasers Emeralds and Common Blues but no Common Darters which were present there last year.
If you are up in the Inverness area Culbin is very worth a visit and could easily produce Goshawk as well as the goodies we had. Definitely more Crested Tits than Abernethy from my experience.
Posted by Lindsay Cargill (aka Loxiafan) at 22:43 No comments: