Okay. some retrospective stuff, more to come. A fantastic day in Aberdeen today so thought we would make the most of the sunshine and check a site very near the city where we have had quite a lot of Common Darters since July this year.

It didn't take long to find some basking male and I spotted a pair in tandem along with several patrolling male Common Hawkers.

A typical Common Darter type for the site: 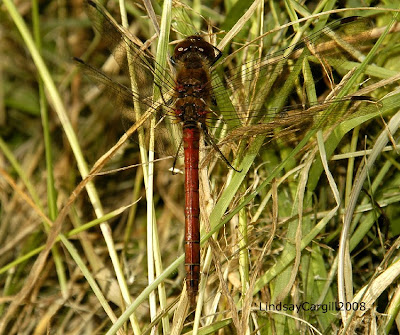 The taxonomy of Common and Highland Darter is comparable with that of Common and Scottish Crossbill - fraught with pitfalls and often vague ! However, the live specimens that I have examined in NE Scotland are markedly different from those more typical of nigrescens I found in Glen Affric and on the whole appear to be more characteristic of striolatum which seems to be spreading northwards along the east coast of Scotland. Last year I even had one in my garden in the city and there are no known pools in the neighbourhood. Most of the ID books I have do not show striolatum (Common) this far north but all my records will go towards the new Atlas.

Here is a profile of a basking striolatum from the site near Aberdeen : 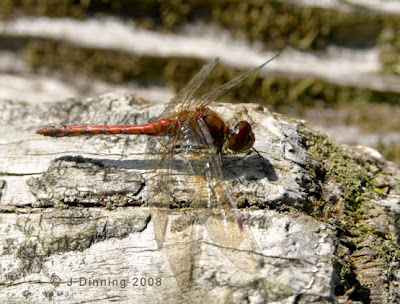 And here is a fantastic and similar posed pic of a nigrescens to compare features: 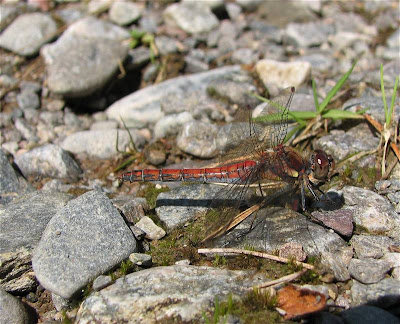 Note the extensive black markings along the side of the thorax in nigrescens, the insect also appears more 'substantial' and robust though this may be age related. The black bands on segment 2 is not failsafe in my opinion as in the top picture these are thicker ala that suggested for nigrescens yet this specimen was clearly striolatum.

Here is one of my Glen Affric ones from July 2008: 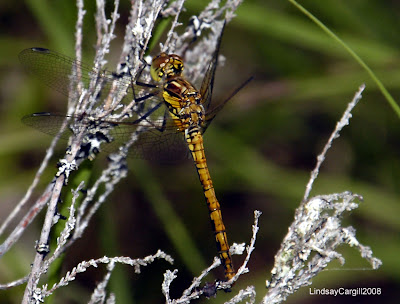 A recent BDS Bulletin has a small update on research being conducted to determine whether or not nigrescens is a different species from striolatum. The preliminary results suggested no significant differences in DNA between specimens from Southern climes and those up here in the North, and that nigrescens is merely a 'dark morph'. Sounds familiar, ha-ha !
Posted by Lindsay Cargill (aka Loxiafan) at 01:35 No comments:

In stark contrast to yesterdays successful Scotbill fest the same dynamic and intrepid team of Loxia experts tried another 'all or nothing' site and........................yep that's right, we got nothing ! Strange as conditions were perfect for catching and there were quite a few birds about. However, they were obviously guzzling somewhere else, indeed I had two Parrot males with a female drink at a nearby bog pool that looked really uninviting for crossbills. Just goes to show "expect the unexpected". The large flocks I had two weeks ago had seemingly evaporated - the question is to where ?


Maximum count was 15 ( in one group) and there were small parties and singles over all day including some Common types ( sounded like Fc1). 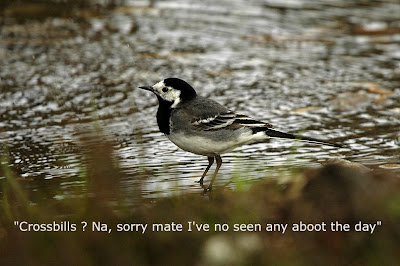 Posted by Lindsay Cargill (aka Loxiafan) at 01:03 No comments:

No Crossbills today, instead I opted for a canon net catch of Lapwings on the Ythan with GRG.

A fantastic bright and sunny autumnal day, warm in the sun and not too early a start which, for someone who works late like me, is a real plus point. Firing in eraly afternoon we caught 105 Lapwings ( 2 later escaped from the sacks they were temporarily held in - not my fault !) , 1 Golden Plover and 9 Starlings. I got to do a whole chunk of the peewits and it was a chance to do some wader type bios - total head, bill length and total foot as well as wing measurements on birds larger than I am used to. Perhaps rather worryingly we only caught one juv and this was a bird that was ringed at Rattray as a pullus by another GRG member. Has it been such a poor year for breeding with Lapwings ?

A few of the adults had completed their primary moult and most were only one primary short of completing. Some were showing signs of weird secondary moult with seemingly retained feathers. Fantastic birds to handle though, one of the best I have done.

I also got to do the Goldie after 'drawing lots' with one of the trainers ( for whom it would also have been a ringing tick ). I aged it as a juv according to Marchant.

Got to do a large chunk of the catch and subsequently learned lots. Rather bizzarely it was a ringing session where there were 3 trainers and only one trainee.
Posted by Lindsay Cargill (aka Loxiafan) at 00:48 No comments: