Who You Calling Phat ?

A nice illustration here of how body size is a distinguishing feature in separating Crossbill types (scroll down a bit, and warning, there are images of dead crossbills):

Notice how the the juv female Parrot, as it is sitting (alive) on the fence wire, does not have an apparently massive bill. Yet in the hand it is considerably larger than Common Crossbills. It does show the sometimes evident "small eye" syndrome though ! In the field it is often difficult to judge overall body size unless you have the luxury of a mixed group, though Commons to me are similar in size to Greenfinch (or just bigger than Chaffinch, which are often nearby). Parrots by comparison are just a bit smaller than a Starling or (smallish) Waxwing (eg. about 50-55g). Bill structure can seem to be in proportion to body size in many specimens thus some Parrots could potentially be confused with larger billed Commons without calls and without a strong idea of body size (indeed they were on Bird Forum a few years ago, though many of the birds had wide bills with strongly decurved culmens as well as "strong" necks.
Posted by Lindsay Cargill (aka Loxiafan) at 23:32 No comments:

I had the pleasure on Monday 1st October of attending a talk on " The Crossbills of Scotland" by Ron Summers as part of the winter talk season organised by Aberdeen SOC branch. A very professional and informative presentation by RSPB Scotland's Chief Scientist and it was very well attended and received by the attending members.

Then....the questions ! Invariably, one questioner got on to "can I, a birder, identify Crossbills in the field with any certainty" ? Well, of course, by using sound recording equipment and producing sonagrams was Ron's response. And then the questioner raised the issue about how, in our local bird report (The North East of Scotland Bird Report), especially the latest one, that it seemed to be "only one individual [me] going around with recording equipment and getting records accepted", and what is the point of submitting any records ! For those who don't know I write the species accounts for NESBR and have done since 2004. Well, I have no idea who this guy was, but I can fully sympathise with his dilemma and the point he made. I politely pointed out that this was not actually the case - records for Common Crossbill were accepted (though as a side note perhaps they shouldn't be as they could potentially be confused with Scottish) and that the large-billed records were accepted per the recommendations in Martin Collinson's crossbill paper in the 2002 NESBR, basically advising that, in order to differentiate with any confidence, 'Large-Billed' Crossbill records for NESBR should be submitted with acoustic or biometric evidence.

As I consider myself a reasonable open minded guy who listens to criticsim, and the fact that feathers are apparently getting ruffled over this, a few points to clarify the situation:

1) We do receive 'non-verified' Scottish/Parrot Crossbill records each year for NESBR and these are very welcome and are actually still very important whether they make the publication or not. They remain 'on file' in the database and are a record of Crossbill sp. for any future researcher or project.

2) The Scottish and Parrot records/sightings that are published are accurate with regards to the current taxonmic criteria and nomenclature. I would think this was desireable/preferable for those who might want to see them or know where they occur. A few of the locations are 'vague' to protect important and sensitive breeding sites and Ringing Stations used by members of Grampian Ringing Group. This is actually standard BTO practise when submitting sensitive data, and if it offends people then I apologise for this inconvenience. Trapping sites have been compromised by photographers, incuding one of my own, so we reserve the right to slightly supress this info. It is not too difficult to read between the lines though, and with a bit of research it should put you in touch with your target species !

3) In all the years of compiling the species accounts for NESBR I have never received an accompanying sonagram, audio file or biometric (including colour ring bird sighting). If I did then these records could be considered pending whether the site is 'sensitive' (c.f 2 above).

I should add that I do get sent sonagrams and audio files, usually from birders South of the border. I always respond to these and help as best I can. One of the most memorable was a birder who was a friend of a NESBR colleague who managed to record "new" Scottish calls at Linn of Dee last year. I have lost all that info due to a Window's Live crash but will contact the friend who lives in Aberdeen and will incude it for the 2011 report.

4) Without sounding like I am blowing my own trumpet, because believe me I am not, if you read the Crossbill accounts prior to 2004 there are often very few records at all nor very much substance. None are 'verified'. Merely stating a fact.

5) I have written under three Editors, I hope they don't mind being listed: Paul Baxter, Ian Francis and currently Nick Littlewood. All absolutely first rate experienced birders and all have been supportive of this approach with Crossbill accounts and I was asked by Paul back in 2004 to do the species accounts as I was doing a lot of work on crossbills in terms of ID via calls.

This said, if there was consensus to include 'non-verified' records, either at editorial level or via public demand, then I could do this. Personally, I only see the point of this with regards a particularly interesting record or in a 'slow year'.

So, in response to the gentleman from Monday night what can local birders do to provide more information for their NESBR Crossbill records ?

In no specific order of importance:

1) Record the calls ! Even on a phone, camera, Mp3 - I have grapped identifiable sonagrams from such machines. The calls of birds as they fly is good as are any alarm (toop) calls they make. By ear is fraught with difficulty for all but experienced crossbill workers - EcC is easily confused with EcE and EcA is confusable with EcD. Flight calls, other than "new" Scottish would confuse most birders without adequate practice !

2) Record which tree species the bird(s) are feeding on. With a date, this can be helpful. The way the crossbills "work" the cones can tell a lot, but some people put too much generalisation in to this - it depends on the status of the cone (green or hard) and the time of year.

3) Are there "streakie" juvenile birds present with adults ? If so are they dependent or feeding by themselves ? Streakie juvs from Oct through to March would most likely be Common Crossbill progeny, though some attempt breeding in the spring. Parrot juvs can occur (in my experience) from April, but usually May through to August (second broods permitting).

4) Moult stages and plumage descriptions of adults and sub-adults. Many 1st or 2nd cy Common's males have "golden" plumage. Females can be distinguished by having dark centres to the crown feathers.

5) Photos, especially "face on" can be helpful as this shows the bill mass and width. Audio is more useful though.

6) If in flocks, the ratio of males to females can be helpful as more males suggests females are nesting, and the nesting periods are more distinct but overlap at the edges. However, it can often be difficult to see all the birds in a tree and females are harder to see and more 'cryptic' anyway.


I hope this helps local birders with their crossbill dilemma - if anyone has any questions or points to raise I can be reached via Bird Forum PM service. Please keep submitting the records as all are useful and important ! 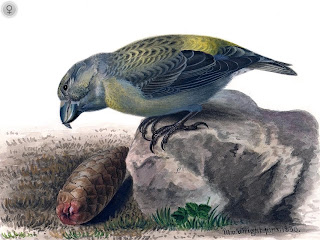 Mmm...Parrot Crossbill eyes up Norway Spruce.....so much for selective feeding !
Posted by Lindsay Cargill (aka Loxiafan) at 00:20 2 comments:

"We'll Take The Oil, you can keep the Crossbill"

S'been a while, I know. Very busy with work and catching up with all my crossbill data as the massive write up of all my data over the last 8 years continues. I am also digistising the remainder of Alan Knox's Crossbill Recordings ( from 1/4 inch tape !) after Magnus Robb kindly provided the first batch. These also need analysed...then collated with all my stuff to provide a 30 plus year call lexicon for Deeside. It's all exciting stuff and there will be a few twists.........

To keep all crossbill addicts going meantime here is a wing moult pic of a rather lurvley second calendar year male Common Crossbill from Finzean in Deeside: 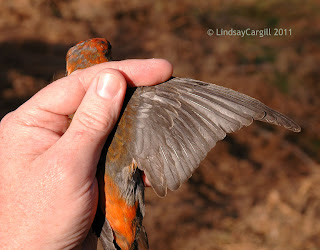 Stay tuned, more to come on calls, biogeography, ecology and what Devo Max and Independence will mean for the Scottish Crossbill  (EDIT content removed to avoid offence to those of a weak disposition..apparently).
Lindsay
Posted by Lindsay Cargill (aka Loxiafan) at 03:14 No comments: