Scottish Crossbill 'stable' and off the UK Red List !

On the news yesterday apparently and also press released HERE in full, summary below:

The Scottish crossbill is only found in upland Scots pine forests. The Scottish crossbill, which is the UK's only unique species of bird, has been taken off a conservation charity's endangered list. The RSPB said the birds' population was thought to be stable enough to no longer be classed among the country's most threatened birds. The bird is one of the few success stories of the 2009 assessment. The number of species red-listed has risen 5% since 2002 to more than one in five of all the UK's bird species.

.....Last year, the organisation warned that climate change threatened the Scottish crossbill with extinction. Its population is only found in Scots pine forests, both ancient Caledonian forest and new commercial plantations.

The species can be seen in the Highlands, Cairngorms and upland areas of Perthshire and Argyll, according to the RSPB. A survey funded by the RSPB and Scottish Natural Heritage found approximately 13,000 individuals of the endemic finch, meaning it is now amber-listed. "

Now, here was me planning to give you all a nice report on a Speyside crossbill fest and a Parrot Crossbill (rant/essay) but this is too topical to ignore, so apologies. Cue rant.
Right, so there are 13,000 Scottish Crossbills ? !!! And here was me thinking 10,000 was an excessive estimate ! Er, well you certainly can't say they are endangered if there are 13,000 of them in a tiny area such as Northern Scotland. However, it gets worse, much worse; as well as being found in the 'usual' areas, they were also apparently found in......shock horror.......Lodgepole Pine plantations in southern Sutherland ! I had to dig deep for info this gem but it is on the Net. And there was me saying those birdguides 'over the way' didn't know anything about Scottish Crossbills......though maybe they did the survey ?! Note the Beeb's (RSPB) press release states that Scottish Crossbills are only found in native scots pine woods and plantations, this of course is not the case ! I like the fact that a press release in 2008 threatens that Scotbill will be wiped out by global warming unless they relocate to Iceland and the following year it is taken off the Red List. Hardly consistent policy.

1) I don't know what sampling methods were used to produce the figure of 13,000. However, I know that in Deeside they apparently didn't find much evidence for Scottish Crossbills in Spring 2008, when in my experience there was quite a lot about - the best year I have seen here. This might imply there are actually more than 13,000 ! The release states "13,000 individuals" were found. I would assume that this figure is in fact an Index produced by multiplying up the number of individuals found at a point sample location by the total surrounding forest area. If they truly did count 13,000 individual Scottish Crossbills then I stand corrected.

2) What calls exactly were classified as 'Scottish'. This is not clear cut IMO.

3) I don't hate the RSPB - quite the contrary I am a fully paid up supporter and think that anyone interested in birds should also support them. I know that will be unpopular with a lot of those 'serious' birder types, but the simple fact is that no organization is better placed to promote the conservation of birds (and other biodiversity) than RSPB. I don't agree with all their 'policies' just like the last political party I voted for ! Doesn't mean you shouldn't vote with your feet.

But I still can't help think this has all been a bit hasty. The results of this survey suggest there should be several thousands of Scottish Crossbills (not my experience here in Deeside at least) and that they have been found in non-native habitat will surely create 'interesting' challenges for their conservation. I understand the need for a census of the species, but I feel the taxonomy of all loxia in Scotland is ongoing, unresolved and, in my opinion, still 'data deficient'. There, I said it.

What do I think ? Well, it's a wildcard and won't win me many friends, but I think they might just have gone and got the wrong crossbill, certainly with respect to promoting the conservation of our native Caledonian Forests. There are (Scots) pine adapted Crossbills resident and thriving in the ancient native woodlands here in Scotland - and you don't get them 'on the (Lodge)'pole' over the winter. I am not denying that there are intermediate billed crossbills in Scotland that, for the time being at least, are specific to the region. However, it is an assumption to say that these 'intermediate'* billed types are the Scottish Crossbill, the relict species of the Great Forest of Caledon. Isn't it ? 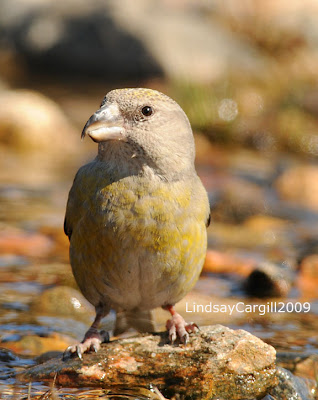 * Intermediate between Common and Parrot.

Posted by Lindsay Cargill (aka Loxiafan) at 19:54