Birdwatch Crossbill Article....The Truth Is Out There ?

As a subscriber to Birdwatch and as someone who was consulted by David Callahan for his excellent article on Crossbill Taxonomy last year I read with interest the piece “Crossbills: New Challenges” by Andy Stoddart in Issue no.228. As a ringer and researcher spending much of my spare time studying the crossbills of NE Scotland some of the content contained in the article raised certain issues with me and there are also parts of the article that I feel are worth further comment. Firstly, I must state that I have every respect for Mr. Stoddart as an author and as respected and experienced birder whose all round experience is clearly extensive and not open to question, however I do know Crossbills very well so I hope my comments are received constructively and in the good faith that they are offered. My main reason for writing this response is that possibly up to 100 times more people will read Mr. Stoddart’s Birdwatch article than ANY scientific paper on Crossbill research, therefore I feel it is important that the facts and information are presented clearly and responsibly and that any speculation or personal hypotheses are also made clear and also in context.


Mr. Stoddart raises the point that the movements of our native birds “are not fully documented, notably the extent to which Scottish and Parrot Crossbills may wander from their breeding areas”. This is not true for Scotland, which is where these birds are resident, as RSPB have conducted two extensive surveys including a Scottish Crossbill Survey. On a similar point later in the article it is claimed that crossbills have been trapped in England during the irruption of 1990-91 that had measurements that “fell well within the range of Scottish Crossbill”. Whilst this may be true there are two factors worth considering and adding as caveats; first, that individual observer bill depth measurements can vary significantly potentially over-estimating the bill depth measurement, and that this, combined with the fact that some Common Crossbills can have long wings, could make large-billed Common Crossbills appear ‘Scottish’. Secondly, there is considerable variation in crossbill biometrics within ‘types’ and perhaps this was ‘exaggerated’ by a bigger sample size during an irruption. Another important point is that, as far as I know, the all important vocalisations were not taken on these birds. In other words to infer that these Crossbills could have been Scottish Crossbills is speculation without foundation - the article that was referenced actually suggested the opposite eg. that some birds in the study considered to have been Scottish on bill size may actually have been Common ! 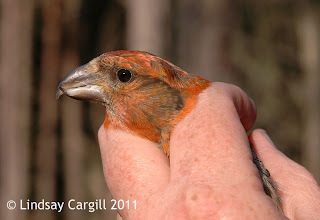 A 'big' Common Crossbill with Bill depth 11.2mm and wing 99mm....﻿
Another assertion that I strongly disagree with is the statement that the work on crossbill vocalisations that has most relevance to British observers is that of Magnus Robb in particular in Dutch Birding (2000). Not to take anything away from the pioneering work then (and now) by Magnus I feel it was a bit of a major omission not to reference or include (or cite !) the extensive work carried out by Dr. Ron Summers on UK crossbill vocalisations and distributions, and in some cases abundance indices are available for all the various crossbill call ‘types’, though again with a particular focus on the Scotland - we are still part of the UK as far as I am concerned regardless of any recent Nationalist 'sucesses'. Ron and his colleagues also matched biometrics with vocalisations, something that Magnus didn’t and which in part may have accounted for some of the Parrot calls on the Dutch Birding CD then being mistakenly classified as Scottish Crossbill. To recommend this to British birders is therefore somewhat errant as presumably they will want to accurately ID both Parrot and Scottish Crossbills. The Chapter on Crossbills in the “Sound Approach to Birding” corrects the calls for Scottish and Parrot and would, in my opinion, be a more appropriate and accurate resource for a UK based birder than the Dutch Birding CD and is readily available. However, the Common Crossbill material in the Dutch Birding CD is indeed comprehensive and worth owning for this alone, and I concede this point.

Given that a major focus of the article was to be on Crossbill Identification I feel more could have been made concerning the differences between Scottish and Common and Parrot and Scottish but I understand that only a general overview was being given. The moult patterns of crossbills can at times be useful in diagnosis as can the temporal presence of streaked juveniles, though some overlap can occur. There were a few comments on Parrot Crossbill and Scottish Crossbill that I found puzzling and one which I challenge. Mr. Stoddart warns and fears of another irruption of Parrot Crossbill where he “[see’s] a future plagued by arguments over digital photographs and whether the bills ‘look big enough’.” Personally I don’t see a problem with this – it seems to happen with other rarities and anyway separation of Parrot Crossbill from Common Crossbill in any location is relatively straightforward in the vast majority of cases. However, regarding Scottish Crossbill I do not understand why a photograph of a perched Parrot ‘type’ bird was used in the final page montage. If one compares it to the Finnish Parrot directly to its left, to me the bill structures look similar – the Scottish bird has its head and bill tucked down which gives a different postural appearance. I am confident if it was in the same posture as its neighbouring photograph the bill structures would look very similar eg. it is a Parrot Crossbill. I questioned photographer on the identification of the bird in this photograph at the time (2007) on Birdguides when it was posted and received no reply as to the methods of its identification eg. presumably no sound recording. Given that, in my opinion, the vast majority of photographs of ‘Scottish Crossbills’ on the web and in even in some publications (some who should know better) appear to be Parrot type crossbills this action actaully compounds and perpetuates this situation further rather than improves it. I also think the rather flippant comment “this species [Scottish Crossbill] – assuming it is one” is very unhelpful and possibly  a tad cavalier. Scottish Crossbill IS regarded a full species by BOU following scientific research by several different workers - like particular laws some people may not like this fact but it is what it is and again the article perpetuates the scenario of “it’s not a real species” comments on the Birding ‘web’ which almost seem to ‘self prophesize’. When Mr. Callahan contacted me for his article I sent him several photographs of Scottish and Parrot Crossbills both ‘in hand’ and ‘in situ’. These birds were either identified by biometric measurements (and sightings of known colour ringed birds) and/or sonogram analysis of flight/alarm call and thus have some provenance regarding speciation. I would have been happy for any of these to be used in the present article by Mr. Stoddart and indeed could have offered more in the knowledge that an article can cite such facts to thoroughly inform readers and birders. I was not contacted. There are no such facts or information provided for any of the photographs in the article so how do we know how these birds were identified ? This needs to change or the problems that Mr. Soddart indentifies will merely continue to be perpetuated.

On the subject of vocalisations, an area of particular interest to my own studies, I have to raise several points. The article raises the question of whether the key to Parrot Crossbill identification lies in the diagnostic recognition of its vocalisations. Well, this is certainly extensively documented so yes it is diagnostic. But as someone who primarily studies Parrot Crossbills here in Scotland I take major issue (and even offence) at the statement “ ..but few-if any- British birders will be well practised in this art”. As someone who can confidently (and accurately) classify crossbill calls to type or species by ear (where they are classified calls) I invite Mr. Stoddart to come out into the field with me some time to bear witness! Perhaps I wouldn't be regarded a 'birder' ? ! There is also another statement that perhaps shows a lack of understanding of the situation : “Following Robb’s elucidation of the different call types, it is clear that several of these at least are resident or reaching Britain, but a precise elucidation of their status remains a long way off”. Again, there are existing publications and articles which show distribution of Common Crossbill call types, origin of sampled birds using stable isotope techniques and there is work in the pipeline by myself and other workers concerning Common Crossbill call distribution and biometric classification. 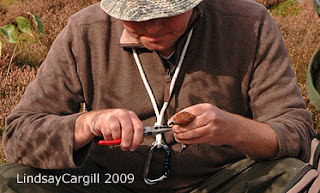 A Crossbill being ringed and processed.......it is being done in UK, honest !

The last point, and arguably the most important, is that the article seriously underestimated the fact that there are already quite a lot of people in the UK sound recording crossbills, either seriously or casually. Two weeks ago I was sent a crossbill call recorded in Glenmore of a call 'type' that I hadn't seen before - sounded quite Scottishy but most likely a variant Parrot call (possibly even a bird call syncing to a Scottish mate - it looked like a blatant Parrot in the photo). This call was recorded by someone visiting the area on holiday from England. I receive many such communications and correspond with recordists as much as I can. Some of these correspondences are actually on this blog - I am not sure if Mr. Stoddart is aware of Loxia Fantastica, but 20 odd thousand other people are...........

New Scottish Flight Call......discovered by actually going out and looking !﻿

So, whilst a potentially interesting opportunity to discuss the Loxia complex, for me the article was a bit of a disappointment and I say this as a fully paid subscriber to the magazine first and as a crossbill researcher second - it wasn't a case of "New Challenges" but rather "Old Hat" or "Business as usual" for some of us !
Posted by Lindsay Cargill (aka Loxiafan) at 12:49