Following Alistair's comments below about the Orkney wing barred Crossbills, I thought I would post some pics of 'pine' crossbills with similar plumage structures.

First up, a first winter male, photographed in Deeside in October 2005, the picture quality is absolutely shocking ( light was bad and from the looks of it I might have been pointing the camera the wrong way round !): 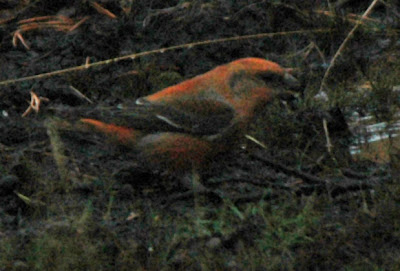 However, you can clearly see it a male Parrot Crossbill ( first winter) based on the massive bill depth, and it has white fringes to the greater coverts and tertials, with some faint brown fringing on the median coverts.

Next, a cracking first winter male Parrot Crossbill caught in Deeside in October 2006: 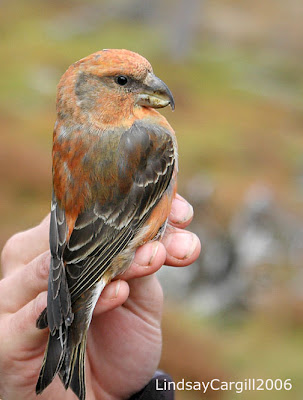 This specimen (bill depth of 13.2mm) has light pale fringes to greater coverts, median coverts and tertials. Normally, these fringes if present are more buff brown in colour. An open wing shot of same bird: 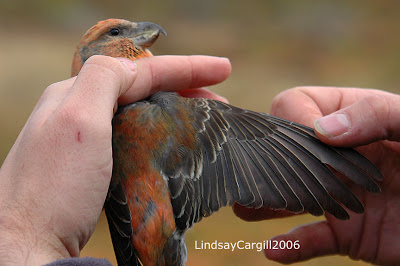 I know some people don't like 'in the hand' shots like this but please appreciate these photographs are only taken to record such plumage and bill shape details of individual colour ringed specimens - they are not 'trophy' shots ! If they had not been taken you would not be reading this post ! All birds are processed as quickly as possible and released unharmed - this particular specimen has been re-sighted many times since its capture and release in October 2006 including feeding juveniles in 2007 and resighted again just a few weeks ago.

The Orkney wing-barred crossbills ? Well the female looks like a Common Crossbill version of my birds above. The male is obscured by foliage but I agree with one of the posters that the fringes look brown not white, and that the tertials are not visible. So for me one definite Common Crossbill (female) and one 'most likey' Common (male).

Posted by Lindsay Cargill (aka Loxiafan) at 09:59

Thank you, I will post a link to your blog and the request for sound recordings on Orkbird. I'm still in Yorkshire at this moment otherwise I would be scooting off to record some for you - only on my Canon but the recordings are often pretty ok. I've put a link to your blog on my new Orkney birding blog ( http://literateherringthisway.blogspot.com/ ) - not much going on there at the moment as I'm in Yorkshire but come the autumn ....
Thanks again,