Managed to park car safely, and, more importantly so I could actually get out when I got back ( though I had a shovel in the boot) ! Waded through 2 feet of snow and picked up several parties of Common Crossbills feeding on native Scots Pine. Finally found a large feeding flock of around 40 Commons feeding on Larch. No juveniles present in this group and sex ratio was 50:50 ( so have not bred). These birds were eating ice from a 'snow plate' on the crown of a stunted Scots Pine - never seen that before. Managed quite a few recordings with my Telinga ( sorry Reservoir Catz/ Tom McKinney) and FR2LE. It sounded like a pet shop at times.

Main concern was where to park the car, with 3ft of snow piled up on the sides of the road: 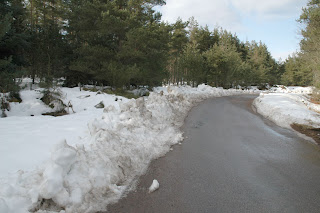 "Eh, WTF is the Car Park ?"
Might seem a moot point to some but the amount of times I have got stuck in my current car beggars belief so access can sometimes be problematic. I finally got the car into a space where a snow plough had turned and on getting out was treated to a Common Crossbill pair near a small stream. Managed a few recordings of these but unfortunately missed the Scottish Crossbill type that flew over the main road just as I got out - aural Id good enough though as they really are unmistakable. I then set off following one of the trails initially, noticing someone before me had been on snow shoes - good idea as the snow was 2 feet deep and heavy going. Then it was off the beaten track and this was not funny stumbing about in 4 foot drifts.
I encountered many group of Common Crossbills and these were all actively feeding on plantation Scots Pine which were for the most part open or opening. The real highlight however, was a first winter female Northern Goshawk that I spotted about a quarter of a mile a way and which then flew straight over me giving the "ki-ka-kaka-ka" call ( which I recorded). However, for the benefit of Res Catz, the ID was visually confirmed in the field, even down to it being a female, the recording merely incidental. Birders who are doubting whether or not they have seen either a Goshawk or a Sparrowhawk have seen a Sparrowhawk - you know when you have got a Goshawk straight away ! I once saw one terrorising a pair of Buzzards which was quite a sight. Sparrowhawks don't do that AFAIK.
So, Common Crossbills in "eating scots pine shock horror". But clearly some were still prefering larch where it was available ( and where there were crossbills !).
Posted by Lindsay Cargill (aka Loxiafan) at 00:10